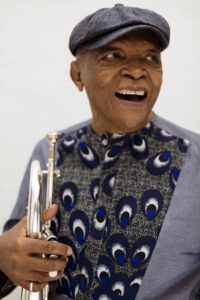 40 days ago, on the 23rd of January 2018, we lost our beloved Hugh Ramapolo Masekela. He succumbed after a courageous battle with prostate cancer. It was never an option that he would concede to death and up until the very last week of his life, he carried on as though he would live forever.

Today as we observe, what would have been his 79th Birthday, we turn again to all the wonderful people here at home and all over the world who wrote tributes to mark his contribution to the world of music and culture, to the many who remarked on his love for his country South Africa and how he had shaped his career to give glory to the courage of his people and to give voice to the struggle against apartheid. Reading through the messages we received it is astonishing to consider where he found the time to maintain the friendships he had cultivated with people he had encountered on his travels.

We turn also toward his spirit of generosity for recognising and developing talent wherever he encountered it, irrespective of the paucity of resources to do so. He just did not believe any obstacle was insurmountable. By the end of his life he had worked with many mega talented artists, many of whom he had discovered and mentored as youngsters, but his best friends numbered in equal numbers his peers with whom he had studied and played with in the many bands he formed during his lifetime.

We return again and again to his life of reinvention. From trumpeter, to musician, composer, arranger, impresario, producer, musical theatre to cultural heritage champion, to writer and educationist. His honorary degrees from UNISA, York, Natal and Wits Universities attest to his success in driving an active and curious mind.

We know that he was a tireless and disciplined worker who expected the same from his colleagues. We understood too, that this was in part an effort to make-up for the time of his extreme alcohol and drug abuse, that led to his entering rehabilitation. He never regarded as time lost forever. In the same way he was sure that exile could never have deprived him of losing his identity. Rather he believed that it had enriched his understanding of the connections between people from all over the world and that there should be no borders, especially among people of African descent on this continent and in the diaspora.

So today we want to thank everyone who helped us through the early days of grief. We are bereft, but not of friendship, not of fellowship, not of kinship and not of human kindness.

To all the people who took care of us at The Pines, a special thank you. We will never forget the efficiency, patience and sheer human affection extended to us. Not even a single complaint from a single one of them. A great South African team!

We say Thank-You too, to the medical doctors who, even in our time of grief, remained steadfast, to the musicians and students, the painters and poets, the religious leaders, the graffiti artists, the DJs, the taxi drivers and the nannies and friends, and everyone who loved Hugh. Their actions spoke of the abiding human link with no borders.

We are grateful to the Traditional Healers Association, especially to Chief Tseane and his ensemble of healers and musicians for a cathartic and still reverberating, send-off for our beloved.

Not least, we thank the Gauteng Provincial government and the Department of Arts & Culture whose assistance allowed us to commemorate Hugh at memorials in the townships of Alexandra and Soweto and through whose cooperation we were able to realise his desire for a traditional funeral.

In the coming months we will be working on several projects aimed at extending Hugh’s legacy through, amongst others, the Hugh Masekela Heritage Foundation. Included in our plans is the unveiling of a memorial at his grave site on what would be his 80th birth anniversary.

We hope to maintain contact with all those who wish to remain appraised of the Foundation’s ongoing work and we welcome your cooperation and assistance.

Any individual or organization interested in further information on projects of or making financial contributions to the Hugh Masekela Heritage Foundation please go to www.hmhf.co.za or info@hmhf.co.za.