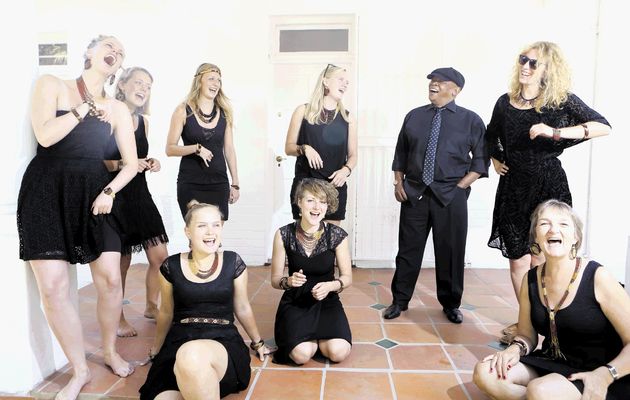 Hugh Masekela has teamed up with a bevy of young Scandinavian girls, the Baobab Singers, to produce an album of African folk songs that will be released next year.

The Danish group has been charming local township dwellers over the past few weeks by breaking into traditional folk songs in Sotho, Zulu, Xhosa and Tswana on street corners, wowing pedestrians with soulful renderings of songs they recognise.

A favourite of Desmond Tutu, the group of Danish singers performed at his 80th birthday party a few years ago and at his wife Leah’s 80th birthday this year.

When Bra Hugh heard them, he was astounded by their knowledge of South African music: ”I was watching television and there were these Scandinavian women singing Zulu and Sotho songs. What knocked me out was seeing these Danish people consumed by our heritage. With music being my first language, I feel they live in a world I’m obsessed with, which is heritage restoration. My first instinct was: ‘How am I going to get hold of them?'”

Baobab Singers’ interest in South African music was sparked by manager Rikke Forchhammer, who grew up in Tanzania. ”When I left, I found I needed African music to survive in Denmark. I studied musicology and specialised in African choral music. I’ve always been drawn to South African music because of its structure and soul.”

When Bra Hugh received an e-mail from Forchhammer suggesting a collaboration, he believed it was fate. The musicians have spent the past few weeks recording an album – not yet named – of 12 tracks, mostly South African traditional songs with some Danish and Norwegian folk songs too.

The songs are arranged by Bra Hugh.

”They have a township jive feel to them,” he says. He plays the flugelhorn but doesn’t sing on the tracks. ”I sound like a frog next to these beautiful voices.”

”With this album we are trying to combine the texture and soul of South African music with Danish music,” says Forchhammer.

Henny Hagerup, one of the singers, says: ”The subject matter is complementary. Our folk songs are stories that people tell about cows and small, everyday things. There are many similarities with South African folk music.”

Bra Hugh jokes: ”I was amazed at the speed at which the girls learned the new songs. I suspect they are also dabbling in African witchcraft.”