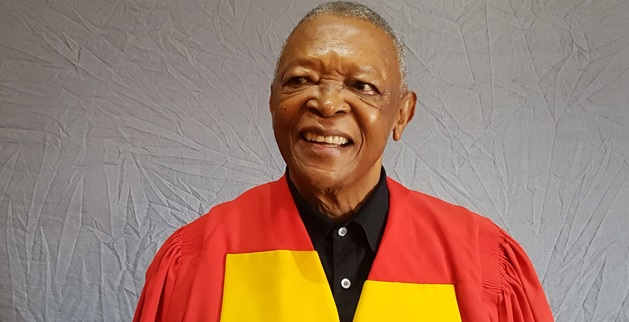 Music icon Hugh Masekela tells graduands to “go out there and kick some booty’.

Wits University today conferred on honorary Doctor of Music degree on Bra Hugh Masekela in the Great Hall, the same stage where he performed as a 19-year-old member of the orchestra in the opening concert of Todd Matshikiza’s landmark jazz opera King Kong.

“I am deeply honoured and honesty humbled,” Masekela said in his acceptance speech.

He implored graduands to become the “new pioneers of African heritage restoration at a time when we seem to be leaning on the brink of being wholly swallowed by most Western culture and several Middle Eastern and Eastern civilizations to the exclusion of our own traditions”.

Masekela says there are innumerable alarming reasons that African society needs to heed for the revival of African heritage restoration, such as the gradual demise of the mother tongue in almost all African countries. “A decade or two from now, African society will be the first in human history to have abandoned its native tongues in preference to those manipulated by colonial rule if we do not soon reinstitute our own languages back into our homes, schools and social interaction with each other.”

He told graduands to learn and teach “our own history” instead of the European education that still consumes us – something that has left us convinced that our heritage is “backward, savage, pagan, primitive, barbaric and uncivilized”.

“We have long relegated our magnificent vernacular literature to the dust and insect-infested floors of crumbling old warehouses in favour of imported writings, hip hop, rap and other forms of trending fashions that distance us as far as possible from our rich traditional legacy.

“We need to study, learn, and teach our traditional music, dance, oral literature and more in our own academies and future educational institutions where we can revive and redevelop what has been lost from the positive content of our glorious history without abandoning the best of what the West has brought to our otherwise void-encrusted lives,” he said.

Masekela also called for a return to the trader society, the great manufacturing civilization Africa once was, and to “cease being consumer fodder”.

“The time is now for Africans to rediscover and regenerate the existing wealth of their artisanship and original design talents and skills so that we can begin to manufacture furniture, linens, cutlery, crockery, bedding, clothing, interior décor materials and fabrics and other household goods for retail and export not exclusive of traditional architecture and construction to replace the frenzied purchase of commodities from other lands.”

“Go out there and kick some booty,” he said resulting in a thundering applause from graduands.