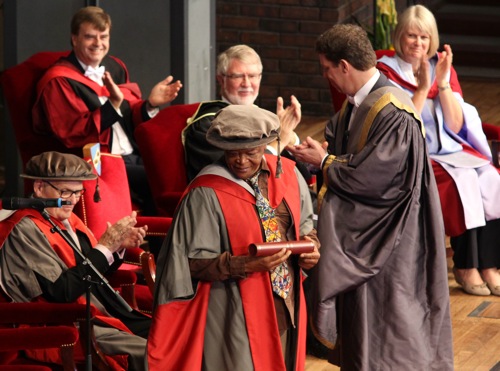 The University of York awarded 16 honorary degrees to Nobel Laureates, authors, scientists, humanitarians,musicians and activist Hugh Masekela. He is among 16 people to receive honorary doctorates at the University’s graduation ceremonies over the past three days.

Every year, the University confers honorary degrees on people who have made a significant contribution to society. Honorary graduates are selected from nominations by members of the University and often have existing links with academic departments or are York alumni.

A trumpeter, flugelhornist, singer and defiant political voice of international repute who remains deeply connected to his home country.

His eclectic musical style is pervaded by jazz and mbaqanga combined with a gravelly voice, stirringly smooth horn sound and an ever-present concern for his home country and continent. He recently founded his own music label, House of Masekela, under which he released his latest album ‘Playing @ Work’.

Born in Witbank, South Africa in 1939, he was given a trumpet at age 14 by Louis Armstrong and is still blowing strong at 75. He spent much of his life in exile during which time he released over 40 albums and was featured on countless more. He has been honoured in numerous ways such as receiving a Lifetime Achievement Award at WOMEX, being granted a Gold Medal of the Order of Ikhamanga in 2010 by the South African government and having 18 March proclaimed ‘Hugh Masekela Day’ in the US Virgin Islands. York University honors Bra Hugh with his second honorary doctorate, the first coming from the Vaal University of Technology in 2011.

Dr Hugh Masekela received the award this morning during a graduation ceremony in University hall where he electrified students and academics with his words and music.

He is awarded alongside: