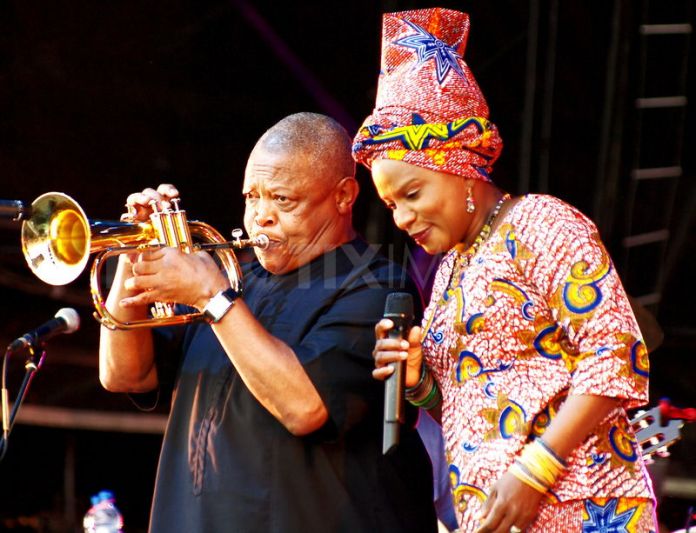 Namibian R&B singer, Ndeshi Shipanga recently represented Namibia at the BT River of Music Festival, held in London as part of the opening ceremony of the London 2012 Olympic Games.

She performed with the SAfricanto accapella group, which consisted of singers from Botswana, Lesotho, Swaziland, Zambia and South Africa. Ndeshi, who was the only representative for Namibia.

Along with a solo performance, Safricanto also accompanied the legendary Hugh Masekela on stage at the London Pleasure Gardens.

Hugh Masekela has come to be known as a living legend in the half-century since he first picked up a trumpet, his voice has long spoken out about his country’s struggle for civil rights, whilst his soaring, joyful trumpet sound brims with warmth and bristles with elements of township jazz, hip-hop and funk.

He took to the BT River of Music Africa stage for two collaborations: first with SAfricanto and the second with fellow African superstar Angelique Kidjo.

The concert also featured a performance by the Senegalese singer, Baaba Maal.

“It was amazing,” says Ndeshi. “There were over 8 000 people at the sold out venue, so it was slightly nerve wrecking, especially working with Hugh but he was really friendly and down to earth and gave all of us hugs.”

Ndeshi recounts how Masekela made sure his part of the show was as authentically African as possible. “He told all the back-up singers to remove the weaves from their hair before the show,” says Ndeshi laughingly. “He said they contain the ghosts of the dead.”

Her involvement in the show started when she was approached by Serious Music, one of the UK’s leading producers and curators of contemporary music, who were looking for singers from southern Africa.

The group met up, learned the various songs and rehearsed only twice before Masekela pronounced them ready for the stage.

“It was such a great day and a massive festival with a massive stage and loads of stalls. The kids were all running around barefoot and it felt almost like being back home,” she said.

The idea of BT River of Music began 10 years ago when Serious created and produced five epic stages around the Serpentine for the Queen’s Golden Jubilee celebration. Since then, they have been developing the idea that has finally become BT River of Music, which brings together artists from across the world for this once in a lifetime event.

Ndeshi relocated to the UK about four years ago, where she has been working with young people and future musicians. She’s had a few small performances and has continued writing songs while raising her son, who saw his mum perform for the first time at the concert last Saturday. She is looking forward to doing more recordings and being involved with future performances with Safricanto.