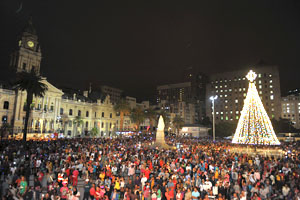 The Festival of Lights celebrations, in the build-up to the traditional switch-on, will start at 16:00 and feature a star-studded entertainment line-up on the Grand Parade.

At 20:30 Mayor De Lille will ‘flick the switch’ to light up Cape Town’s traditional festive lights, amid a spectacular fireworks and laser display.

‘We are committed to uniting the many diverse communities from across the metropole and invite all Capetonians to come out in their numbers and enjoy the celebrations. An event is a uniting force and people come out with a common purpose, to relax and have fun together in a shared space. We would like to see the “gees” once again at this year’s festive season events,’ says the City’s Mayoral Committee Member for Tourism, Events and Marketing, Councillor Grant Pascoe.

Headlining the pre-switch-on entertainment is South Africa’s pre-eminent trumpeter-singer-songwriter, twice Grammy-nominated jazz legend Hugh Masekela. With 60 years in the music business, Masekela holds the Order of Ikhamanga from President Zuma (2010) and a WOMEX Lifetime Achievement Award (2011). He has also appeared the world over alongside the likes of Paul Simon and the late Miriam Makeba and Miles Davis.

Mi Casa will then take to the stage for an electrifying street party. The South African Music Award-winning, Johannesburg-based house music trio have topped various charts nationwide and have opened for a number of major international acts.

Also in the line-up are local crossover band Hot Water, the classically trained vocal maestro Selim Kagee, chart-topping electro-swing outfit GoodLuck, pop singer/songwriter Jimmy Nevis and Cape Town’s beloved dance-pop band The Rockets. They will be followed by DJ LuWayne at 21:40, who will spin the latest and greatest hits for revellers until 22:00.

The celebrations will be hosted by award-winning local entertainers Sorina ‘Die Flooze’ Erasmus of 7de Laan fame and Terence Bridgett who has appeared in Isidingo, Backstage and 7de Laan.

South Africa’s largest free open-air public event, the Festival of Lights, coincides with the start of the four-week countdown to Cape Town assuming the coveted title of World Design Capital (WDC) 2014 – a historic moment that will take centre stage at the City’s first New Year’s Eve celebrations on 31 December 2013, to be held on the Grand Parade.