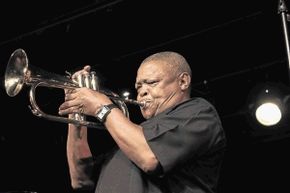 A Set for Jazz Aficionados

Hugh Masekela is mainly known, particularly in this country, as an Afro-jazz artist who melds his native South African folk sound with American jazz-tinged music, achieving a unique flavour.

Well, that is one side of the man who honed his skills and sound in the Sophiatown of the 1960s.

There is, however, another side to this man, whose travels around the world from Europe to North America are perhaps as regular as travelling from Johannesburg to Cape Town for some of us. He is a serious jazz muso, well educated in the tradition of the genre in the West, particularly in the US, where he lived in exile for many years.

Masekela has released a four-CD set comprising mainly reworked and reinterpreted American standards, which certainly demonstrates his jazz side.

The CD, which he launched at Old Mutual on the Square, Sandton, to an audience composed mainly of those in the know when it comes to jazz, is testimony to the man’s versatility and his mastery of US jazz standards that are usually only achieved by jazz musicians of the highest order.

Having been educated at the famed Manhattan School of Music, where he met the likes of internationally renowned pianist Larry Willis. The two recorded the CD in South Africa last year after sharing the stage at the Cape Town International Jazz Festival.

The new CD was first launched to critical acclaim in New York last month and the local launch, which was attended by among others his sister Barbara Masekela, the former SA high commissioner to France, his daughter Pula, comedians David Kibuuka and Loyiso Gola, was an intoxicating affair that had the audience eating out of the legend’s hand.

While I saw a number of nods among the crowd in appreciation of what Masekela and Willis have done on the CD, I wonder if it is the kind of album that would endear itself to those who are still wet behind the ears when it comes to jazz.