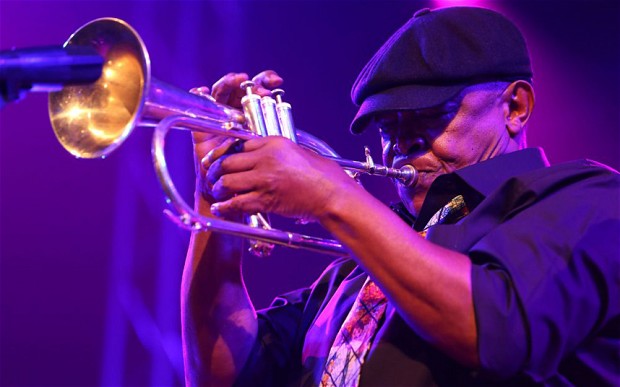 Hugh Masekela, now 75, shows he has lost none of his passion in a golden performance at the 2014 Hay Festival

Hugh Masekela grew up with all kinds of American musical influences as a teenager, from Benny Goodman to Lionel Hampton. But he also had some British influences, too, including George Formby, a Lancashire ukulele player, singer and comic actor who made his start in musical halls. Formby might seem a surprising role model until you see Masekela perform. The South African jazz musician is a born showman.

Masekela sings with a wild abandon; he sent flugelhorn lines plunging and soaring; he delighted the audience at the Hay Festival with a string of anecdotes, jokes and social and political statements. It was very entertaining.

Masekela turned 75 last month and the story of how, aged 13, he was inspired to become a musician after seeing the film Young Man with a Horn, in which Kirk Douglas plays a jazz trumpeter based on Bix Beiderbecke, is pretty well known. But, more than six decades on, he has lost none of his passion for music.

His patter was sometimes schmaltzy – “thank you, you people of Hay-on-Wye, we are going to make you go on tour with us from now” – but it also came with statements that reminded you of the courageous battles this long-time anti-apartheid campaigner had fought. “Humans have behaved very badly towards one another,” he said. “Let’s cut out all this colour thing and all the bull—- that goes with it.”

Masekela, who first came to England in 1961, when he studied trumpet at the Guildhall School, went off on an enjoyable riff about actually being from Inverness (“my real name is Gregory Scotty McGgregor the third . . . junior”) but the patter did not overwhelm the inimitable mix of American bebop idioms, rhythm and blues and South African traditions in the music.
There was a smashing version of Masekela’s own song Stimela, about the trains that carry migrant workers from their homes. He evoked the sound of the train in a piercing scream but you could sense the implication of human tragedy underneath, and his gravely voice, so guttural at the lower range, is still special.

A mention, too, for the band, whose skill gives Masekela the foundation to be at such magisterial ease. Masekela must know what a talent he has in Cameron John Ward, whose stunning stylistic range and sweet guitar licks were such a feature of the show. It didn’t stop the grand old man teasing the youngster, though. Masekela told the crowd, when introducing Ward, that they must not tell anyone they had seen Ward playing: “because he is on probation from the criminal school for boys and the police and his mother are still looking for him”.

The great thing about the Hay Festival is its variety. As Masekela was delighting fans in the Tata Tent, a mere 30 second walk away, in the Telegraph Tent, The Super Furry Animals founder Gruff Rhys was delighting audiences with a show of incredible imagination – while wearing a furry wolf head.

There was an irresistible sunny optimism to Masekela’s concert, with the audience either dancing in their seats or in the aisles, but for all the showmanship, it was his unmistakable golden flugelhorn tone that was so memorable.