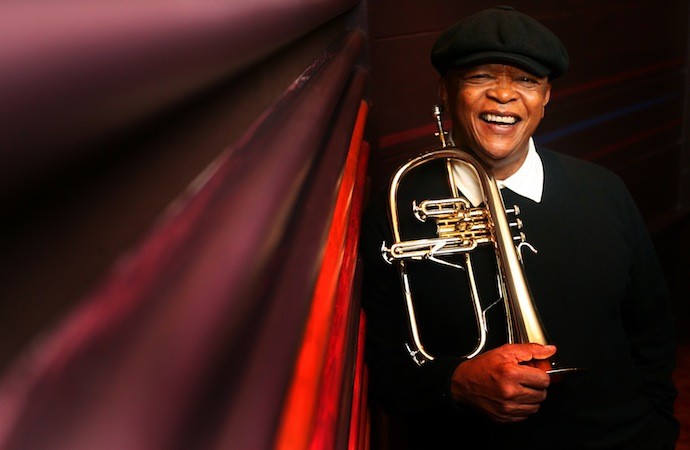 Jazz trumpeter Hugh Masekela may be a global icon, but his heart remains firmly in Mzansi – and he’s looking to restore its cultural identity.

At 74, Bra Hugh shows no signs of slowing down or resting on his laurels. Far from it. Indeed, he’s involved in several projects – recording, performing and writing – while preparing for the Hugh Masekela Heritage Festival, which takes place on Saturday, 28 September at the Elkah Stadium in the Soweto Cricket Oval and includes appearances by Thandiswa Mazwai, Mi Casa, Jeremy Loops, Desmond & the Tutus, Pu2ma, Phuzekhemisi and Khaya Mahlangu. It’s backed by Assupol, Soweto TV and Jozi FM.

It’s a fitting event for a man who’s done more than any other local musician to put South Africa and its music on the global map, and who’s revered internationally not only for his unique style and his flawless technique, but also for his numerous compositions, his professionalism and – above all – his utter commitment to his art.

He’s also acclaimed for his remarkable versatility: this is a trumpeter who’s as much at ease performing laid-back, Thirties and Forties Cole Porter and Gershwin with his long-time friend, pianist Larry Willis (the two released a box set last year titled Friends, which is set to become a classic) as he is rocking up a storm at a live gig, spending many hours in the recording studio, helping to showcase other artists or attending to releases under his own label.

The upcoming heritage festival, he says, is something he’s long wanted: not to blow his own trumpet (though he’ll certainly be doing that too!), but to have a platform in the heart of SA’s best-known township to bring authentic South African music and artists to the people. “When I was growing up, music was an integral part of the townships,” he says. “We played and heard it all day. Music surrounded us at all times. On weekends there were brass bands playing and marching, kids chanting songs in the street and singing groups on every corner. We had no TV or other entertainment – music was our way of life. If someone was getting married, there’d be a white flag attached to the house and the choir would practise for days leading up to the event.

“Today, that’s all disappeared. People in the townships – particularly the youth – have completely lost that element. And with it, they’ve lost a huge part of both who they were and who they are. Kids have no idea of their history, of what their mothers and fathers and neighbours went through, or the role music played in binding communities together and helping people survive the years of oppression. They’re listening to other music, by other artists in genres that aren’t part of township culture, and sung in English. I fear the day when our young people say: ‘They tell us we used to be Africans once.’

“What I’m trying to do is restore pride in their heritage, in their ethnic identity, in their language and in their artists. So the festival is a good platform for that.”

He’s excited about the surge of explosive young talent in the country, and while he doesn’t regard himself as a mentor – rather as a fellow artist who happens to have a lot more experience and exposure, and who loves collaborating – he says he sees and hears daily proof of Mzansi artists who can ignite a flame of cultural revival that will burn for generations to come.

He’s also turned to stage musicals as another format for realising his cultural vision. His musical, Songs of Migration – written and directed by James Ngcobo and featuring stupendous diva Sibongile Khumalo – drew on Bra Hugh’s own iconic compositions (Stimela, Languta) work, as well as some of the most poignant and powerful traditional songs ever to emanate from South Africa’s dispossessed, divided and disinherited communities. The show was highly successful, with lengthy runs in Johannesburg, as well as performances in Cape Town and a tour to Europe. He’s aiming to revive the show, as well as do others reflecting the legacies of the Manhattan Brothers, Ladysmith Black Mambazo and Miriam Makeba.

Though he has no plans to retire anytime soon, Bra Hugh’s mindful of the need to document his career and his own remarkable journey, from shebeen-born Alexandra urchin to celebrated jazz maestro on the stages of Europe, Asia and the rest of Africa. It’s a journey that’s included wild, bohemian living, artistic and personal bonds with some of the greatest names in music, marital upheavals, personal heartbreak, substance addiction, rehabilitation and – above all – a passion for living, crying, laughing and uplifting through his instrument. His autobiography, Still Grazing, covered his life to the point where he returned from his years of exile to post-liberation South Africa. He’s now busy revising and extending it.

Then, of course, his extremely busy international touring schedule sees him spending much of the year abroad. And his recording work continues: his latest release, Playing @ Work, has been ecstatically received – and he has many more in the pipeline.

Anyone who’s watched Bra Hugh on stage knows why he’s considered one of the world’s greatest live performers: consummately professional, yet warm, relaxed and utterly unpretentious, he has audiences spellbound. His astonishing energy, vibrancy and discipline – as well as his superb group – take both music and audience to a state of near-hypnotic power. Yet for all the excitement, he’s in complete control of everything happening both on stage and in the audience. It’s a level of authority and confidence very few artists anywhere in the world can match.

Don’t miss his festival this coming weekend. It’s one of the most appropriate ways there could be of celebrating both SA’s heritage, and one of its greatest artists.