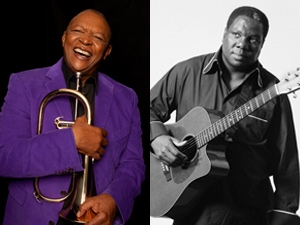 For those of us who came of age in the ’80s, South Africa was the human-rights cause. College campuses were filled with signs urging divestment and condemning apartheid, the South African policy of institutional segregation. If you were in high school or college around the time the Boomers were celebrating the 20th anniversary of the Summer of Love, it seemed like our generation missed out on everything . . . almost. We may not have had an unpopular quagmire of a war to oppose (we’d have to wait until the 21st century for that), but there was still South Africa. Sadly, the support of international business made it seem like their unjust system would never end. The idea that deliverance was just a few years away seemed as absurd as . . . well . . . the Berlin Wall coming down or the collapse of the Soviet Union. Prophets we certainly were not.

This year marks the 20th anniversary of the end of apartheid in South Africa, and to celebrate, legendary South African musicians Hugh Masekela and Vusi Mahlasela have embarked on a cross-country tour.On Tuesday night, Masekela and Mahlasela kicked things off in the Egg’s Swyer Theater. Performing before a near-capacity crowd, the two master musicians presented what Masekela described as a “cross-section” of music from the various cultures that comprise South Africa. As was fitting, most of the music was high-energy and positive.

Masekela is perhaps most famous in this country for his watershed appearance at the Monterey Pop Festival in 1967 alongside Jimi Hendrix, Ravi Shankar, Otis Redding, and the Who, as well as his 1968 soul-jazz classic “Grazing in the Grass,” which Masekela played early in the evening. In addition to his mellow golden tone on the trumpet and flugelhorn—the latter of which was on display on Tuesday—Masekela also showed off his passionate vocals as well as contributing some tasty percussion. Masekela alternated between his horn and a spirited tambourine on several numbers, and also played the hell out of the cowbell. Christopher Walken was right: You’re really gonna want that cowbell!

While perhaps not as well-known in this country as Masekela, guitar virtuoso Vusi Mahlasela proved himself well-deserving of his equal billing. He opened the show with a solo number gorgeously performed on acoustic guitar. His intricate fingerpicking made an effective contrast to his versatile voice. Mahlasela whispered like the wind through tall grass and whooped like a bird breaking the stillness of the morning. He ululated and even performed some low-frequency overtone singing.

When the rest of the band joined for the second number, the atmosphere at once turned electric. Mongezi Ntaka played the electric guitar, employing the mandolinesque technique of rapid picking associated with township jive groups like the Boyoyo Boys and popularized in the West by Paul Simon’s Graceland album and groups like Vampire Weekend. Bassist Bakithi Kumalo—who actually played on Graceland—offered up his liquid fretless bass and funky slap technique. Percussionist Francis Fuster and drummer Ian Herman wove entrancing polyrhythms that had the audience grooving.

Many of the songs were in South African languages such as Zulu, and while Masekela and Mahlasela did a fine job of explaining the meaning and importance of each song, the message ultimately came through regardless of language or cultural context. Many of the songs were celebratory. Some were angry songs of protest. But all of it spoke to the unconquered spirit of the South African people, as well as reminding us that injustice has not retreated from the Earth. In a particularly affecting moment, Mahlasela spoke of the wisdom of forgiveness. After centuries of war and invasion, oppression and abuse, the South African people have enjoyed two decades of freedom.

“We’re not perfect,” Masekela observed, “But we’re not underfoot anymore.”