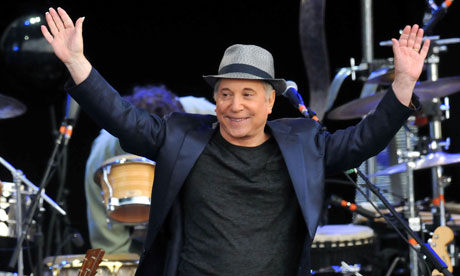 Hugh Masekela Joins Paul Simon in London to Kick off the Graceland Tour!

This celebratory concert marks the beginning of an anniversary tour that coincides with the release of a new edition of Graceland, which was recorded in Johannesburg last year and features a number of the musicians off the original album.

In 1987, South Africa was in a state of emergency, Nelson Mandela was behind bars and the South African people were utterly oppressed by the apartheid government. The international community established boycotts in support of the Struggle – including a cultural boycott that Paul Simon broke by recording Graceland in South Africa. Hugh Masekela defended him against international outcry at this contravention as it was not only hugely advantageous to the careers of the South African musicians involved, but also brought a much higher level of awareness of the South African situation to the world.

Twenty five years on, their anniversary tour is a joyous celebration of their longstanding friendship that is now welcomed in a democratic South Africa. Both septuagenarians show no signs of slowing down as they revel in the diverse, funky, beautiful music that brought them together.

The tour continues and Masekela joins Simon for the following appearances: