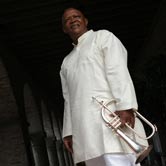 The Examiner
By Jill Marino

“360” got off to a truly magnificent start last night, as U2 played to a whopping 98,000 fans in Johannesburg, South Africa.

“We know Jo’burg has a night life. We know Jo’burg needs to go a bit crazy,” Bono said to the crowd before U2 played “Crazy Tonight”. The record-breaking audience were treated to many surprises, including trumpeter Hugh Masekela playing with the band during “I Still Haven’t Found” and a special new lyric during “Pride”, as Bono sang a tribute to Nelson Mandela:

The band also showed images of the recent events in Egypt during “Sunday Bloody Sunday”.

As for the rest of the setlist (via U2Tours), a lot of it resembled what they played last year in Europe and Australia. Songs like “I Will Follow”, “North Star”, “Miss Sarajevo”, and encore starter “Hold Me, Thrill Me” all made appearances. However, U2gigs is reporting that opener “Space Oddity” was cut and a “Get On Your Boots” remix was played instead. “Beautiful Day” opened the show, but unlike last year, it wasn’t introduced with “Return of the Stingray Guitar”.

Click here for video of “With or Without You” and “Moment of Surrender” from last night in Johannesburg. Check around the 7:45 mark when Bono asks for the lights to be turned down. What a beautiful image of those cell phones illuminating that stadium. It’s so great to see U2 back on stage and for giving fans a night that they will remember forever. I can’t wait for the North American leg to start!
Hugh Masekela surprised 98,000 U2 fans in Johannesburg last night when he joined the band onstage to play “I Still Haven’t Found What I’m Looking For” and “Pride (In the Name of Love).” Check out the video here.