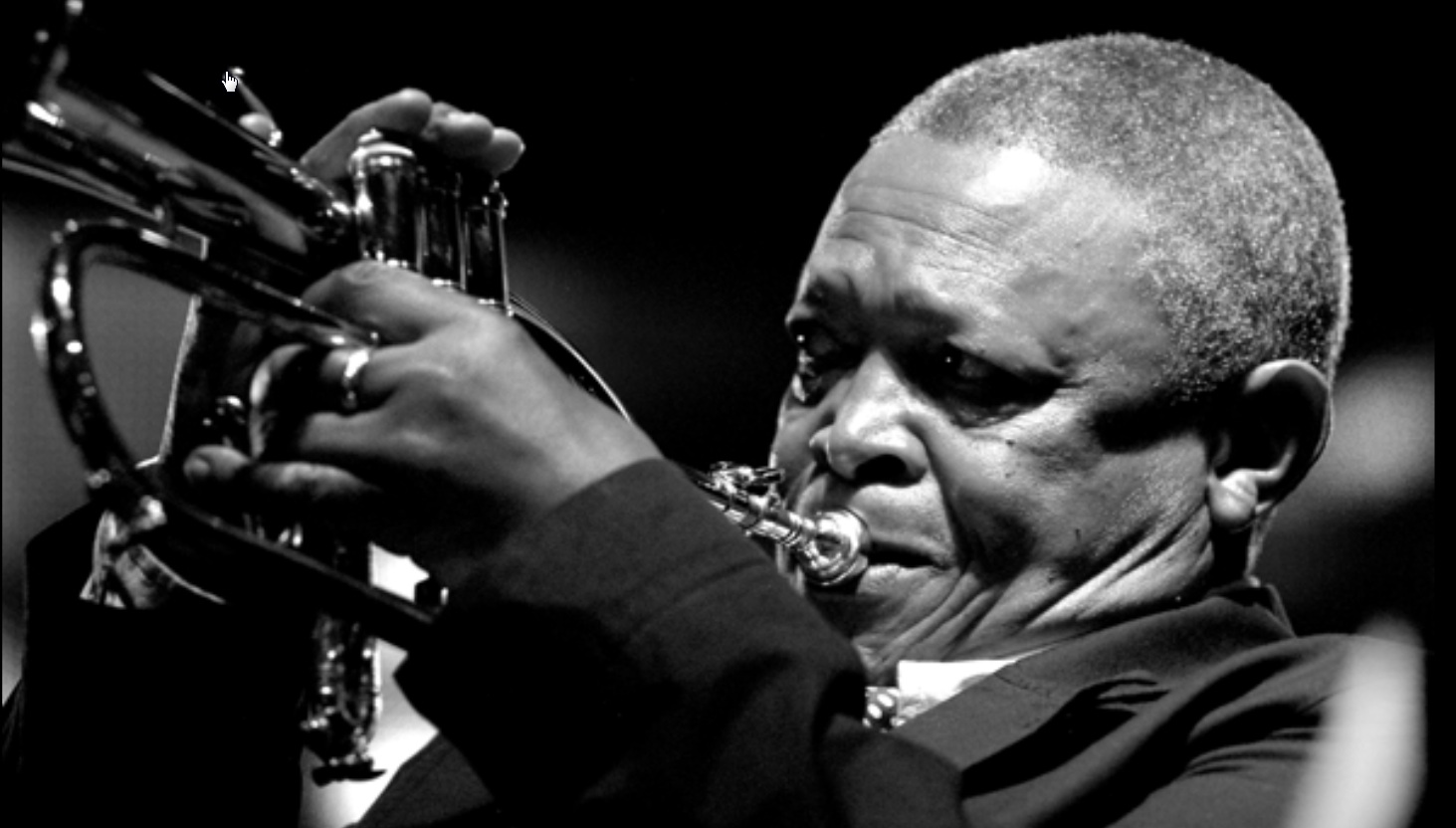 It’s inspiring, even comforting, to know that a giant like Hugh Masekela can be vulnerable and unsure. This man not only brought a global awareness to his native South Africa, but through his music, he also led the fight to end apartheid, a fight that exiled him from his country for over thirty years. Even former President Nelson Mandela sent Masekela a letter from prison thanking him for the work that he has done. And despite his legacy, Masekela was still afraid of a little thing called jazz. Despite having made an entire career out of fusing jazz with his “shit from home” as he says, Masekela still had doubts about his ability to play American standards. Music critics like Stanley Crouch and Leonard Feather have often dismissed his work, saying things like “He ain’t playing jazz” or “That ain’t jazz.” Although his name has become synonymous with South African, even world music, Hugh Masekela is very much an integral part of the New York jazz scene.

In the early 1960s, he studied at the Manhattan School of Music with the likes of Donald Byrd, Herbie Hancock and his good friend, pianist Larry Willis, who accompanies him tonight during his first-ever appearance at Jazz Standard. “Larry was one of the people who introduced me to ‘New York, New York’ when I’d just come from ‘the jungle.’ And we had something in common because he, too, came from the jungle—153rd and Lenox!” After two numbers in, Masekela recalls how he first met Willis, who was a voice major studying opera. “One day when the opera people were rehearsing, there was Larry in a white wig and a baby blue George Washington outfit! They were doing Così fan tutte or one of those things. I said to him, ‘Larry, why are you doing this?’ ‘Why are you wearing those clothes and singing that music?’” Masekela credits jazz lecturer John Mehegan for teaching both him and Willis the art of jazz improvisation and how crucial it was to learn the popular standards. “You couldn’t get into jam sessions in those days if you didn’t know the songs. And not only did you have to know the songs, but [also] the keys and the chords.”

Like most jazz musicians, Masekela and Willis were also students outside of the classroom, jamming for hours on end at landmarks like Jazz Gallery, The Village Gate, even Birdland. Most recently, during last year’s performance at The Cape Town International Jazz Festival, Masekela and Willis devoted almost an entire live set to his 2005 album Almost Like Being in Jazz, revisiting the standards that gave them their musical bearings. After performing to the sold-out crowd in Cape Town, friends and family (including Willis) urged Masekela to record these songs once again. Reuniting with Willis, their latest album is aptly titled Friends, a 4-disc box set containing 40 songs—38 are American standards while two are from the French composer Michel Legrand. Masekela gives Willis credit for bringing the “jazz” out of him on this album. “Larry taught me all of these songs because he knew them better than I did. All I had to say was ‘I like that song.’ ‘You like it?’ ‘We’re gonna play it!’”

Willis kicks off the second set with a quiet, contemplative piano on Randy Weston’s “Hi Fly.” After a subtle pickup of the tempo, while he steadily taps his foot in rhythm, Masekela creates an ebb and flow on flugelhorn with his notes as he starts off powerful and high, and then comes down in a soft, breathy staccato. Applying a bit too much force in the opening, especially when he tackles the melody line, Masekela finds his way back quite nicely during his improvisation with a tidal wave of punctuated notes before handing it back to Willis, who creates a few waves of his own with a strong, lyrical piano. To see (and hear) Masekela and Willis “dance” together during their call and response as they close out the number shows both the intimacy and trust that these musicians share.

They approach “Monk’s Mood” with slight trepidation, like they’re merely running through the piece. As they come to complete stops after almost every chord change, this approach somehow conjures the essence of not only Thelonious Monk’s style — dramatic, intense and prone to spontaneously dancing and stopping in the middle of a number— but you also gain a real appreciation of how beautiful the melody is after they “break it down.” While the next tune keeps the theme of lush melodies going with Thom Bell’s “You Make Me Feel Brand New,” Masekela jokingly recalls his initial shock when Willis suggested this song for the album: “Larry, that’s R&B…we’re supposed to ‘almost be in jazz!’” Masekela is more than warmed up as he tackles the vocals on Fats Waller’s “Until the Real Thing Comes Along.” Channeling the spirit of the great crooners like Billy Eckstine and Johnny Hartman, Masekela narrows in on you, making you feel as though you’re the only woman he’s singing to in the crowd. He’s never flowery or overly sentimental, but he instead takes a more modern approach as he “woos” you, full of the usual candor and suggestive charm that he brings to all of his performances.

As they closed out the evening with Herbie Hancock’s classic “Cantaloupe Island,” a fitting tribute to his friend (and former classmate) as they marked International Jazz Day earlier in the week, it was not only the perfect ending to an evening of timeless jazz standards, but in true jam session form, Masekela and Willis invited another great artist to join them on stage that night—none other than jazz vocalist Dee Dee Bridgewater. After a few quick hugs and kisses, Masekela “coaxed” Bridgewater into scatting for the crowd and soon enough, they were playing off one another like dear, old friends. But then again, every moment spent with Hugh Masekela is “almost like being in love.”