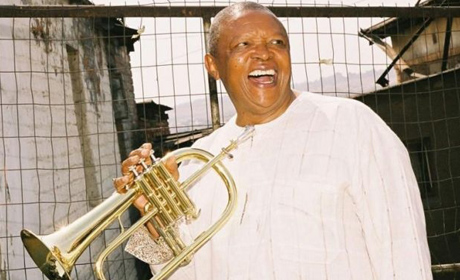 The Herald Scotland
By Rob Adams

Philip McGillicuddy was born in Liverpool and hung out with John, Paul, George, Ringo and … Mick before being washed across the seas to South Africa. The swim through all the muck gave him a certain complexion and a passing couple took pity on him, fished him out and – ach, you’ve twigged. I’m at it. Or rather, Hugh Masekela was at it, with an alternative biography.

The South African flugelhorn player and cultural icon is a rascal. He does almost as much leg-pulling as music-making. But it all adds up to a party, even if some dancers were out of their seats too early for Mr M’s liking.

Such keen audience participation is a tribute to the persuasiveness of Masekela’s groove because the opening numbers, coming close to smooth jazz with township-churchy melodies, were a clear indication that Masekela knows how to pace a gig. Fluctuating between skilful horn improvisations, percussion instruments, the vocal mic and a sort of personal tai chi, he has his band well drilled. When they do fire up, it’s relative, although guitarist Cameron Ward produced much appealingly stinging playing, and still geared towards making Masekela, rightly, the focus.

A very youthful 71, Masekela handles the limelight with ease, getting his message across succinctly and “toot tooting” his way through Stimela, his song about the coal train that brings forced labour into South Africa, without diluting its potency. Thereafter the dancers had his blessing and the groove eased up a notch without appearing to overtax the musicians.