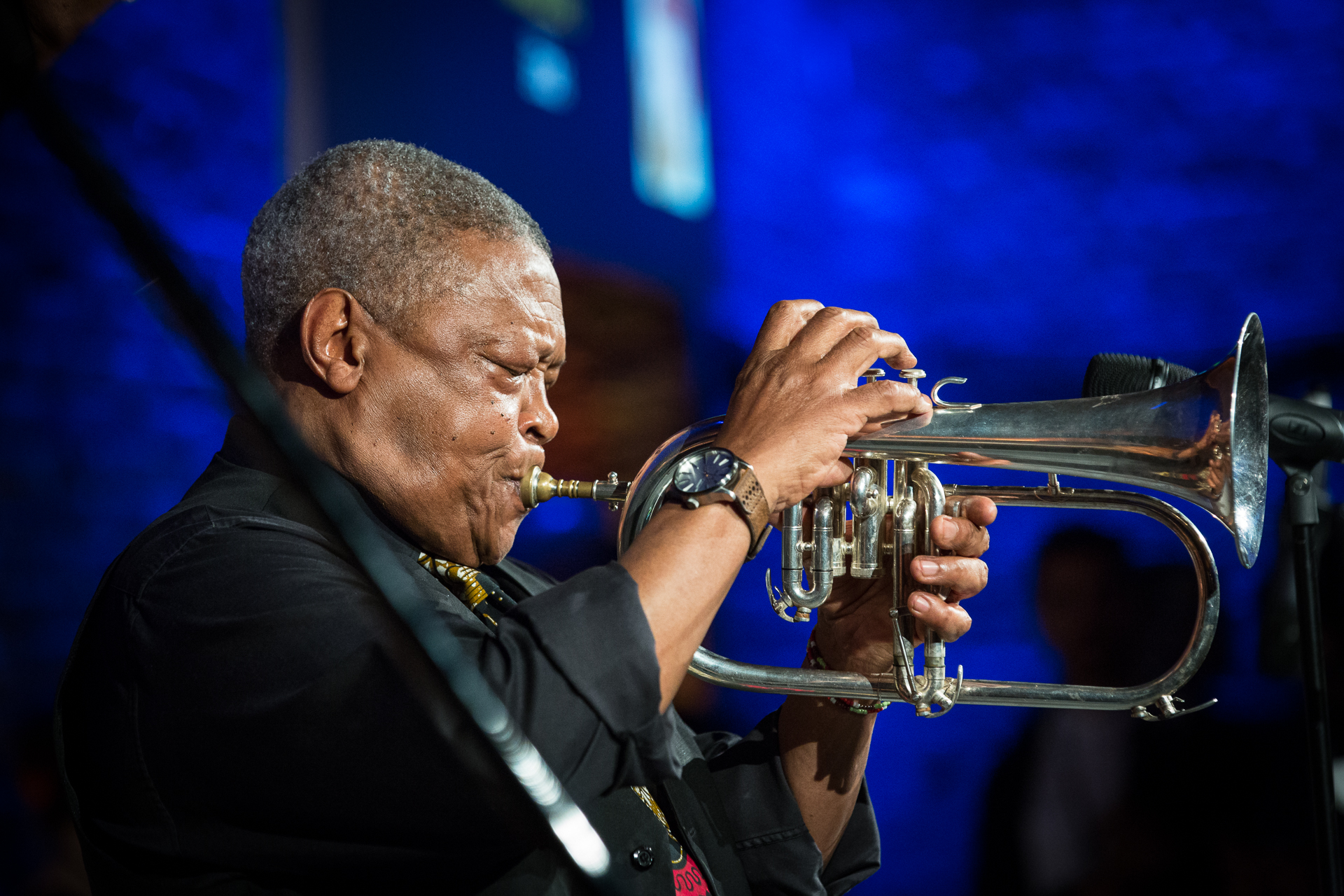 The second Jazz FM Awards, in partnership with Serious, took place tonight at the Great Halls at Vinopolis, London Bridge, establishing itself as the most prestigious accolade for jazz.

The night, hosted by actor and The Fast Show’s ‘Jazz Club’ Louis Balfour, John Thomson, featured stunning performances from PPL Lifetime Achievement winner Hugh Masekela who performed with Larry Willis, a beautiful tribute from Rebecca Ferguson, celebrating the centenary of Billie Holiday, and the House Gospel Choir. A surprise performance of the night came from Soul Artist Of The Year winner Jarrod Lawson. A wealth of talent was in attendance and celebrated with the winners with eleven awards being presented on the night recognising distinction and commending those that have made an exceptional contribution to Jazz, Blues and Soul.

Gregory Porter took his second Jazz FM award win with International Jazz Artist of the Year. The ‘Liquid Spirit’ singer successfully crossed over with his 2014 album recently reaching no.9 in the UK charts. The charming baritone is already widely regarded as one of the finest singers of his time, despite having only come to prominence in recent years. As a gospel, blues, jazz and soul singer in one package, he successfully saw off competition from drummer Antonio Sanchez, who wrote the soundtrack to the Oscar winning motion picture ‘Birdman’, and the powerhouse fusion-band Snarky Puppy.

Snarky Puppy’s pianist Bill Laurance won the Breakthrough Act award, having received widespread success and critical acclaim for his highly anticipated album ‘Swift’. Delivered with more classical leanings than the straightforward funk of Snarky Puppy, Laurance successfully demonstrates how deep groove and classical sensibility can sit happily side by side.

World-renowned multi-instrumentalist, bandleader, composer and singer Hugh Masekela was commended with the PPL Lifetime Achievement Award for both his outstanding contribution to music globally and as an incredibly important political voice. The South African artist who was a pillar of the anti-apartheid movement and has worked with every jazz legend imaginable commented:

“Over the past 45 years, England and particularly London has been a principal centre in my developmental journey to the place I have ultimately reached today in my life as a musician. Jazz FM has been a prime centre of support for me since its inception. It is therefore a humbling and highly fulfilling privilege for me to receive this Lifetime Achievement Award. I thank all who have supported me on an often difficult but ultimately joyous voyage which has brought me thus far down this musical highway.’

Jarrod Lawson won Soul Artist Of The Year. An impressive feat having gone up against the renowned D’Angelo and ‘the first daughter of soul’ Lalah Hathaway. The blue-eyed soul boy’s meteoric rise to fame saw him playing two sold out shows at the Jazz Cafe on his first visit to the UK. With a virtuosic talent on the piano and an ability to groove like the legends he takes much inspiration from, Lawson is one of the biggest soul-jazz sensations in years. Jarrod gave a surprise performance at the awards with his rendition of Leon Russell’s ‘A Song For You’.

Manchester three piece GoGo Penguin collected the gong for the public voted award, Jazz Act Of The Year. The band, made up of pianist Chris Illingworth, bassist Nick Blacka, and drummer Rob Turner, saw their profile raised after being nominated for a Mercury Award last year. GoGo Penguin’s hard-hitting jazz-meets-electronica was up against the London based Sons Of Kemet and Polar Bear for the award.

Son Of Kemet did not walk away completely empty handed as Instrumentalist Of The Year went to their incomparable bandleader and saxophonist Shabaka Hutchings. The innovative saxophonist went up against pianist Alexander Hawkins and trumpeter Laura Jurd for the award.

Vocalist Of The Year was an all female affair with nominations including Lauren Kinsella and Alice Zawadzki, with the award ultimately going to the much deserving Zara McFarlane. The MOBO award winning artist’s second album ‘If You Knew Her’ (released in 2014) was a sublime blend of neo-soul infused with her jazz heritage, allowing her to show her skill for fantastic song writing and flair for jazz improv.

Best Live Experience (chosen by public vote) was awarded to Loose Tubes at Cheltenham Jazz Festival ‘ the group’s first show in 24 years. The 21-piece band featured an all-star cast including keyboardist Django Bates, saxophonists Mark Lockheart (Polar Bear) and Iain Ballamy (Food), the irrepressible trombonist and charismatic MC Ashley Slater (Freak Power, Kitten and the Hip) plus trumpeter Chris Batchelor (Big Air). The pioneering act who were at their most productive in the 80s inspired a generation of musicians, and their set of classics and new commissions alike had fans on their feet for a standing ovation at Cheltenham.

The Innovation Award went to Jason Moran who has been constantly pushing the boundaries of the genre and challenging the ideas of what it is to experience jazz in the live arena. Since his emergence on the music scene in the late 90s, the jazz pianist has collaborated with dancers, skateboarders, artists, actors and varied ensembles. As a recording artist he has established himself as a risk-taker and innovator in almost every category; improvisation, composition, group concept, repertoire, technique and experimentation. In 2014 Jason successfully took his first step into scoring a major feature film with the Oscar Winning Selma.

New Orleans icon and rock and roll hall of famer Dr. John was recognized with the Blues Artist Of The Year Award. The six-time Grammy Award winner is a bona fide legend whose 2014 and 2015 world tours included sold-out shows throughout the U.S. and Europe.

Full list of WINNERS (and nominees) for the Jazz FM Awards 2015:

Album of the Year (Public vote):

Live Experience of the Year, sponsored by 7digital (Public Vote):

Instrumentalist of the Year:

Vocalist of the Year, sponsored by CityJet:

Jazz Innovation of the Year, sponsored by Mishcon de Reya:

International Jazz Artist of the Year, sponsored by Taylor’s Port:

Blues Artist of the Year: