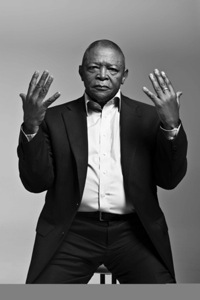 WOMEX is proud to announce the winner of the WOMEX 11 Artist Award: Hugh Masekela, the trumpet prodigy, fiery denouncer of Apartheid and Afro-jazz pioneer from South Africa.

He will perform on Sunday morning, 30 October 2011, during the WOMEX Awards Ceremony accompanied by a WOMEX Networking Breakfast, both open to WOMEX delegates only. The laudation will be offered by Francis Gay, Head of Music at WDR Funkhaus Europa in Cologne, Germany.

It’s been nearly 60 years since Hugh Masekela first picked up a trumpet, and we can all rejoice that he shows no sign of putting it down yet. It was the instrument that helped him find his voice to sound out against the injustice and suffering inflicted on millions of South Africans by apartheid and it helped him break out during those dark days to bring a musical communiqué to the rest of the world.

The emblematic figure of South African music has indeed become an elder statesman, revered and respected for his tireless championing of his country’s rich and diverse cultural heritage. But, as his commitment, energy and constant quest to refine his musical language show, he is also still the young lion who pioneered new directions in South African jazz in the late ’50s, escaped to New York in the ’60s and who took the roots-flavoured hit Grazing in the Grass to the top of the US charts in 1968. Since then he’s created an impressive body of work that journeys through jazz, pop, funk, afro-beat, reggae, fusion and more, yet always retains the immediately recognizable Masekela signature. And that’s because he has never lost sight of where he’s coming from. The sounds of the townships: jive, church choirs, children’s games, gumboot dances, work-songs, marabi, kwela and the mighty mbaqanga; all these expressions of the great multi-layered cultural tapestry of South Africa provide the spiritual foundations of his art and have remained a constant motif within the music.

After a decade of living in the USA, the 70’s saw the beginning of a long journey home, moving to Guinea, Liberia and Ghana, releasing a string of albums exploring Afro-beat, jazz and soul music. In 1981 he moved to Botswana and founded a music school and a mobile recording studio, which produced the global disco hit, Don’t Go Lose it, Baby. But dark forces were still at work in South Africa and in 1985, the nefarious cross-border activities of South African Defence Force death squads prompted a retreat to England. There he recorded Bring Him Back Home, a rousing, anthemic demand for Nelson Mandela’s freedom, and set off on Paul Simon’s Graceland tour alongside Miriam Makeba and Ladysmith Black Mambazo, taking this message to millions around the world.

The inevitable collapse of the apartheid regime came with Mandela’s release in 1990 and Masekela finally returned home. Although, as a cultural spokesman and musical ambassador, his part in the struggle for freedom has been considerable, he modestly defers praise. As he has said: “The heroes of South Africa are the people who faced the guns and the tanks and sacrificed their lives for us to be free today. I think those are the people that should be praised, we don’t hear too much of them”. But it’s through culture that we can perceive the abstract truths of our humanity, and Hugh Masekela’s art is permeated with the spirit of the struggle. Today, at 72 years young, Hugh Masekela is more productive than ever. He’s still touring, recording, collaborating and educating. He is concerned with what he calls heritage restoration: the continuing necessity of changing the mindset inculcated in his people by religion and oppression over centuries that their deep cultural heritage is primitive and pagan. So, the struggle continues, and we can hope that Hugh Masekela will continue to play his considerable part in sounding out his messages of peace, pride and progress, for many years to come.

Along with his WOMEX Artist Award, Hugh Masekela will be given money to put into a project of his own choice.

After battling his own 44-year addiction, legendary South African jazz trumpeter Hugh Masekela founded MAAPSA – Musicians & Artists Assistance Programme of South Africa. It was launched in October 1998 to raise funds, fight substance abuse, and provide support to artists and performers in need of help and guidance to overcome addiction. MAAPSA is a non-profit organisation that has assisted many leading South African entertainers, including Kabelo and Tsepo Tshola, as well as dozens of ordinary people who come from an artistic background. It offers referrals to rehabilitation treatment centres, after care, intervention, counselling, guidance lectures, and fundraising campaigns to cover treatment bills and administration salaries. MAAPSA provides free advisory services to guide those in need of help and now boasts a 70 percent successful recovery rate.

Masekela says, “The one thing that I think all musicians who have recovered from addiction of any kind have found, is that support from people who understand the specific challenges of addiction in the entertainment industry was crucial in helping them emerge into sobriety. Alcohol and drug dependence are destroying our great nation.”

Now in its 13th year, MAAPSA continues to grow from strength to strength and is now looking to partner similar international organisations.