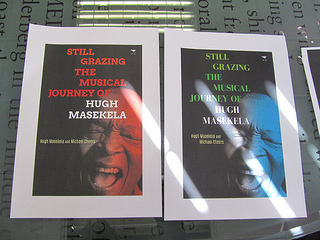 Jazz legend Hugh Masekela was in the Jacana Media offices this afternoon to sign the contract for the local publication of his memoir, Still Grazing, which came out internationally in 2004 but was never released in South Africa.

Masekela said he believes South African society has become complacent since the time of Steve Biko and other young intellectuals of the apartheid era, and hopes that his book can stand as an example of the forthrightness needed to turn the country around.

“In 1990, when all the apartheid laws were dropped, we were probably one of the most intelligent societies in the world,” he said. “Since then, I think we have become dumbed down, not by freedom itself but by the hype that we are free now.

“I don’t bite my tongue in this book,” he said, adding to Impey: “I hope you have some bail money for me …”

“We’ll sell loads of copies of the book, and use that money,” she joked.

The book was first released in 2004, but disappeared more or less without a trace, much to the consternation of Masekela’s fans.

“The way it came to South Africa, which is the only country where it went out of print, is because when I was signed to Sony Records, the head of Sony at the time was smart enough to agree to buy a whole consignment from Random House, and I twisted Exclusive Books’ arm to bring it into the country,” Masekela explained. “So they brought in a limited amount, but you can’t find it now anywhere. In the States, they just put it out there, they didn’t do anything else. So it’s one of the world’s biggest secrets outside of South Africa – and in South Africa.

“But no matter where we go, people ask ‘Where can I buy the book? I’ve tried Amazon, I’ve tried Mississippi, I’ve tried the Nile River …’

“So we’re happy that Jacana elected to release it.”

Masekela is currently writing an update to the book, as the original version ended in 2002. However, he explained how a large chunk was recently stolen from a train – in Europe.

“I had about 56 pages of what I’ve been writing,” he said. “But I just came back yesterday from a European tour, and we were on a train after a concert in Frankfurt, in first class, eight of us, and we were very relaxed – this was a luxury train – but when we got to Paris my suitcase was not there. I got very homesick right away,” he joked.

“I lost 56 pages, my expensive pairs of shoes, three of my favourite ties, my lint remover – the things I miss most!

“So my advice to you is when you travel, don’t use an expensive suitcase. This is what I discovered after 60 years of travelling.”

Despite the setback, Jacana MD Bridget Impey is confident of a late October publication date.

All copies of the first print run will include Masekela’s latest CD, Playing @ Work.

Hugh Masekela is a prodigiously talented giant of jazz and world music, and a pioneer in sharing the voice and spirit of South Africa with the rest of the world, but his globetrotting tale transcends music.

First published in the USA in 2004, this autobiography shares with rich detail Masekela’s life, infused with love and loss, sex and drugs, exile and revolution. He survived it all, with wit, passion, abundant talent and wisdom, and is now bringing his story back home!

A new foreword and afterword to his autobiography will add fresh insights into the life of one of today’s few living world-class artists and rare spirits.

Still Grazing narrates a magical journey around the world in this epic, music-soaked tale of love, excess, exile and home.

Masekela’s life began in a South Africa haunted by violence, but redeemed by the consolations of family, music and adventure. As the grip of apartheid tightened, he was driven into exile and embarked on what would become a 30-year pilgrimage around the world. His first stop was New York City, where he was adopted by legends such as Dizzy Gillespie, Miles Davis and Harry Belafonte. Masekela lived through some of the most vital and colourful music scenes of our time: blowing with bebop greats in New York, playing with a young Bob Marley in Jamaica, hanging out with Jimi Hendrix and Sly Stone in the 60s, and getting lost in the madness of Fela’s Afropop explosion in Lagos. He loved extravagantly, and was married to Miriam Makeba for some time, experimented wildly with drugs and alcohol, and stumbled into adventure after adventure. And through the hit musical Sarafina (which he conceived with Mbongeni Ngema), the Graceland tour he spearheaded with Paul Simon, and his fearless on-the-ground activism, he worked tirelessly to add his voice to the anti-apartheid movement. When he eventually returned to South Africa, he at last found the strength to confront the personal demons that had tracked him around the world, and attained a new measure of peace at home.

Unfolding against the backbeat of the most revolutionary musical movements of the last forty years and one of the most inspiring political transformations of the twentieth century, this is the utterly engrossing and deeply effecting chronicle of a remarkable, one-of-a-kind life.