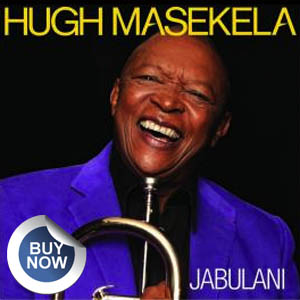 Legendary Jazz-Icon Hugh Masekela has been nominated for a Grammy Award in the “Best World Music Album” category for the album “Jabulani”- Produced and arranged by Don Laka,& released through the Gallo Record Company label in South Africa and Razor & Tie Records in the USA.

The critically acclaimed release “Jabulani” was recorded in Johannesburg in 2010, and features a selection of traditional African weddings songs that were re-interpreted by Masekela, and includes the hit single and video “Sossie” as well as the live favourite “Makoti”.

It has been over 30 years since Masekela received his first Grammy® nomination for “Grazin’ In The Grass” in 1968.

“Wow! This is most unexpected, – I’m baffled and humbled at the same time” says Masekela

Masekela has released 43 albums since his career began in the mid – 50’s & has recorded and performed with some of the worlds most celebrated artists including the late great Miriam Makeba, Paul Simon, U2, Fela Kuti, The Crusaders (Joe Sample, Wilton Felder, Stix Hooper), The Byrds, The Mahotella Queens, Herb Alpert, Ladysmith Black Mambazo & Manu Dibango to name a few.