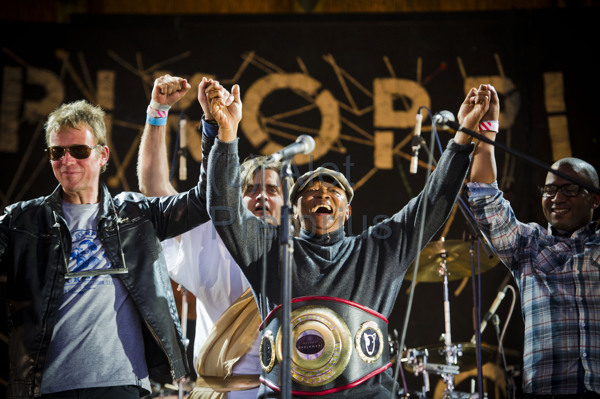 When Hugh Masekela finished his Oppikoppi set to rapturous applause, a member of his crew wrapped a champion’s belt around his waist as if he was an undisputed heavyweight boxer.

He certainly played like a champ, with the agility and enthusiasm to match the young crowd he was playing for on the James Phillips stage on Saturday afternoon.

His hit single Thanayi, which closed the show, was a favourite and when he had taken the bow, the loud chants of “we want more” prompted him to return to the stage for a sing-a-long chorus.

But it was not just the young adults who loved him. One man walked away saying, “I feel good. My heart is connected again.”

Unfortunately local hip-hop star Cassper Nyovest’s 7pm performance on the Red Bull stage coincided with that of headliner Aloe Blacc, who was impressive with just keys, drums, sax and a guitarist backing him. In fact the American singer-songwriter’s only misstep was when, slap-bang in the middle of Northam in Limpopo, he told the crowd he was pleased to be playing in Johannesburg, except he was 250km from the City of Gold.

Songs off his latest album, Lift Your Spirit, proved most popular, particularly Soldier in the City, Wanna Be with You, Red Velvet Seat, and the smash hit Wake Me Up, which he co-wrote.

This was the popular music festival’s 20-year anniversary, and the lineup struck a balance between mature and young – from Cat Power and Springbok Nude Girls to PHFAT, The Muffinz and Spoek Mathambo.

On each of the three nights, the Red Bull stage hosted many a drunk reveller – most of whom landed on their backs on the slippery surface.