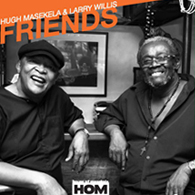 “We all do ‘do, re, mi’, but you have to find the other notes yourself,” advised Louis Armstrong. Bra Hugh’s been exploring those other notes since Satchmo sent him his first horn back in the ’50s. After six decades spent trying to prove his so-called jazz credentials to tone-deaf critics, Masekela’s finally smiling. At 73, he doesn’t need to prove anything to anyone. But here he is, hooking up with longtime buddy Larry Willis to swing through a set of 40 straight-ahead jazz standards. That’s right: a four-CD set. And damn, do Masekela and Willis swing. The opening quartet disc featuring Victor Masondo (bass) and Leroy Sauls (drums) eases the listener straight into the sentimental mood with a lilting rendition of “Body and Soul” and a groovelaced take on Herbie Hancock’s “Cantaloupe Island” prepping the path for a “’Round Midnight” reading of Thelonious’ “Monk’s Mood”. The rest of the triple play is a chance for Hughie and Larry to celebrate their love for the Great American Songbook – from breathtakingly beautiful ballad improvisations (Gershwin’s “I Loves You Porgy”, Ellington’s “Come Sunday”) and sprightly call-and-response conversations (“The Days of Wine and Roses”) to old-timey Tin Pan Alley folk croons (Hoagy Cramichael’s “Rocking Chair”). Of course, Hugh isn’t just any horn man. He knows what pops. So he woos the ladies with a muted Miles-style makeover of Michel Legrand’s Thomas Crown Affair theme come-on “The Windmills of Your Mind”. Then completes the consummation by bleeding the melody from Bread’s ’70s soft-rock smash “If” into Sammy Cahn and Charlie Chaplin’s “Until the Real Thing Comes Along”!