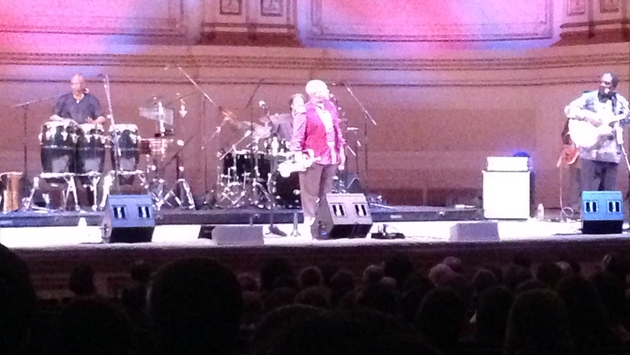 Hugh Masekela and Vusi Mahlasela headlined the first concert in Carnegie Hall’s series “Ubuntu: Music and Arts of South Africa” Friday night, Oct. 10, at Stern Auditorium at Carnegie Hall. The concert was entitled “Twenty Years of Freedom” and was a celebration and commemoration of 20 years of constitutional democratic government following the downfall of the apartheid regime in 1994.

The Ubuntu festival was produced by the Carnegie Corp. and others with support from South African Tourism and South African Airways, which were well represented in attendance among the community of friends of South Africa that gathered for the performance and the commemoration.

The Ubuntu festival will also incorporate other arts events at venues throughout the city.

The opening concert was dedicated to the triumph over apartheid, colonialism and racial discrimination and the overarching theme of Ubuntu. Ubuntu is a southern African philosophy of community and roughly translates to “I am because you are.”

The Musical History of Struggle

Putting aside the songs from Masekela’s recording career dating back to his 1962 debut album “Trumpet Africaine” and through nearly 50 more albums he has released since, he and Mahlasela dedicated the evening to a historical review of South African popular music during the apartheid era in South Africa.

It began with “Meadowlands,” a gentle swing song dating back to 1956 in protest of the apartheid government’s razing of the thriving black cultural center of Sophiatown and forcibly relocating its residents to a newly developed suburb in the township of Soweto.
Masekela provided a narrative of South African history and the struggle for freedom of the native peoples since the first European incursion with the Dutch colony at Cape Town in 1652.

“For 350 years of struggle our people were never intimidated by the system,” Masekela told the audience. “We lived our lives trying to defeat the system.” In 1994 the defeat was finally achieved with the fall of the apartheid regime and the adoption of a new constitution that recognized voting rights for all South Africans.

As one of the most music-driven cultures to ever emerge on the planet, South Africa not only commemorated its history in song, it drove its revolution with song, and Masekela and Mahlasela retraced an outline of the history of the resistance to apartheid through some of the most memorable songs of the period, including Masekela’s “Bring Back Nelson Mandela” and “Stimela”, Mahlasela’s “When You Come Back”, and Johnny Klegg’s “Asimbonanga”.

Somi sat in on a performance of “Pata Pata”, a song made popular by South African singer and once wife of Masekela, Miriam Makeba, and the Swahili song “Malaika,” also recorded by Makeba.

Dave Matthews sang one of his songs and joined in on some of the others, including “Asimbonanga”. He came back to the stage for an encore singing “Sugar Man”, the song by Detroit singer-songwriter Rodriguez, which was a big hit in South Africa while remaining unknown elsewhere in the world, including the U.S., as shown in the film Searching for Sugar Man.

Carnegie’s Ubuntu festival will continue through Nov. 5 and will include performances by Ladysmith Black Mambazo, with Paul Simon sitting in, and a tribute to Miriam Makeba by Angelique Kidjo.