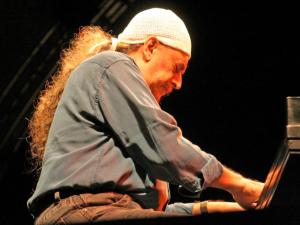 High-brow jazz forms a major part of the annual Arts Alive this year. It will be one of the rare occasions when South Africans will be able to see Hugh Masekela play classical jazz. He will be joined by life-long friend and jazz pianist extraordinaire Larry Willis.

Their performance forms part of the South Meets South – An Evening with the Masters performance. India’s violin icon, Dr L Subramaniam and Egberto Gismonto from Brazil complete the line-up. The concert is taking place at the Bassline on September 7.

Bassline’s Brad Holmes conceptualised the show and is very excited about what will transpire on the night. It is also in keeping with South Africa’s inclusion in the Brazil, Russian, India, China and South Africa group with cultural items from Brazil, India, and China featuring strongly in the content across artistic genres.

“It is an evening with the legends and I have chosen four musicians over the age of 70,” he enthused. “It’s going to be very personal and they will all end up playing together at the end.”

“Gismonti is a world-renowned multi-instrumentalist who is known for playing guitar. However, he will be playing piano.”

Looking at his vast repertoire, it is doubtful the man sleeps. He has recorded more than 60 albums, 27 scores for ballets, 28 film scores, 13 TV series and 11 theatre productions.

Bra Hugh and Willis have known each other for 60 years and tour the US as a duet.

They met at the Manhattan School of Music as students. Willis has played on more that 300 albums and recorded with greats such as Dizzy Gillespie, Art Blakey and Shirley Horn.

Pu2ma will provide the vocals to their performance.

He has more than 150 releases and has collaborated with artists such as Herbie Hancock, Al Jarreau and Joe Sample.

South Meets South will take place at Mary Fitzgerald Square under a dome. Tickets are available from Computicket.

The Johannesburg Arts Alive festival starts on Sunday with Jazz on the Lake.

This annual free festival boasts a strong line-up yet again. Mafikizolo is a must-see, particularly after their latest release and massive success of their songs Khona and Happiness.

The mbaqanga legend, Phuzekhemisi, makes a rare appearance at this end of the country and is also a great live experience.

Brenda Mntambo has been making waves in and outside of gospel.

There’s also a special treat for jazz heads in the Satchmo Trumpet Summit (from the US), while the Sufi Gospel Project from India promises to spice things up.

Please be aware that there will be road closures from 9am.

eTuk Tuks are available for the first time, and there is a park and ride from the Metro Building in Braamfontein and the Alexandra football stadium.