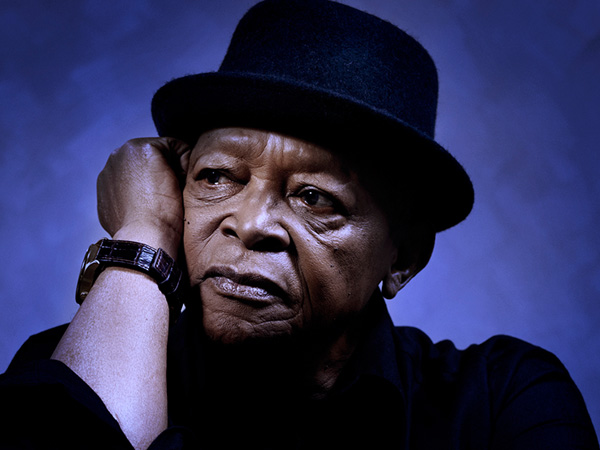 I ask Bra Hugh if he’s on Twitter. He replies: “No, but I’m on Whatsapp.” I’m defeated.

He notices my disappointment and we burst out in laughter.

He may not be as tech-savvy and on top of social media trends as I would like him to be, and at 77 it’s kind of understandable. But Hugh Masekela is not shy to express himself.

We begin our quick chat in the comfort of his offices in chic Parkhurst, Johannesburg north. He’s just got back from Ghana where he performed at the inauguration of the new president Nana Akufo-Addo.

“He’s an old friend that I met through Fela [Kuti] in the 70s, because he was Fela’s lawyer. And I’ve watched him for 40 years aspire for this office because his passion for Ghana is so deep, and it’s a pleasure to finally see him get it.

“He lost twice in the last 10 years, the last time he lost by 20000 votes, but now he won by a million and half votes. Sometimes patience helps.”

Masekela is one of the greatest living musicians of our time, and he continues to release music. His newest is No Borders. He makes no apologies for being a proponent of Africa without borders.

“The music speaks for itself. You can feel geographically where we are most of the time. I’m very obsessed with cancelling the borders in people’s minds and let them get a sense of who they are.

“The Hugh Masekela Heritage Foundation does work in the historical space. Our people don’t know anything about themselves.

“Cancelling borders in our heads and nationalism will help us to get rid of xenophobia, especially if we knew our history because most of us re makwerekwere (we are foreigners) historically. I tell people when I’m on stage that us, the Masekelas taught the Batlokwa how to till the land, but originally we are the Munyepawu and come from Zimbabwe.

“Even in our praise singing it’s there.”

The album is an eclectic mix of sounds and influences, a nomadic journey from Cape to Cairo, Dakar to Addis.

He recorded Been Such A Long Time Gone first some 40 years ago on the album I’m Not Afraid, which had the original Stimela and The Marketplace.

“It’s like a trip from the desert right down. At the end it says right across the river Limpopo white soldiers standing in the road, then pop goes my dream, but I didn’t put that in because that was an apartheid reference.”

Congo Woman, is a delightful tribute to the DRC, the land of a thousand dances. In it he celebrates the dances – kwassa kwassa, rumba and others.

“I was inspired by Papa Wemba. There is a great album of his called Bakala Di A Kuba. In it he has this song where he sings with four other Congolese and they exchange parts, so I called my nephew and Kabomo and Tresor to put in the Congolese feel.”

Other feature are JSomething on Heaven In You, Oliver Mtukudzi on Tapera and Themba Mokoena on The Rooster and KwaZulu. It is produced by Kunle Ayo

Perhaps his most important recording is In An Age with his son Selema, known as Alekesam in Hollywood.

“He’s been a musician since he was a kid. When he started school he played the clarinet, the saxophone and has always been able to sing. He got together with Sunny Levin, who is my best friend’s son and they formed a group and Sunny wrote the song and they asked me to rap on it and put something in an African language, so I chose a Tswana verse.

“I’d like this album to have an impact on whoever is listening to it, a curiosity about Africa, and African history and the whole borders situation. It should awaken interest about our origins. And I hope they enjoy the music.”

“I feel very fortunate. I was bewitched with music when I was a child and I ended up living in it. I never planned to get where I am today. I just went into it for the passion. And it brought me halfway around the world a few times.

He is thankful to have met some of the greatest people in the world thanks to his music.

“I was helped by a lot of people, especially Miriam, Father Huddleston, and Belafonte, Dizzy Gillespie and Miles Davis. I was able to go to exile for 30 years and still come back home to see the change and the freedom of our people.

“I think we are in a disappointing era in our lives. What we hoped for for our freedom is not really taking place. I really hope everyone had the chances and opportunities that you and I have, at least to live a half a decent life. The truth is that the majority of our people are poor.”