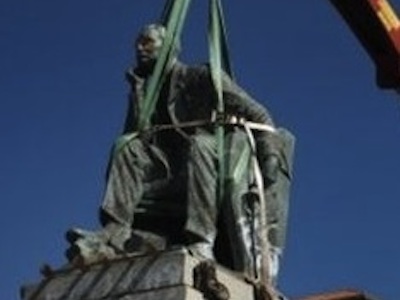 Trumpeting his views: If African people were so concerned about colonialism they would have to give up their largely colonial lifestyles, jazz legend Hugh Masekela said when he was presented with an honorary doctorate in music at Rhodes University in Grahamstown yesterday. Masekela was commenting on the current campaign to remove or destroy colonial-era monuments. He commended the youth for their activism, but said there were more pressing issues that needed tackling.

Jazz maestro Hugh Masekela criticised the campaign to destroy and have removed all remnants of colonialism, saying if African people were so concerned about it they would have to give up their largely colonial lifestyles.

Masekela – who received his fourth honorary doctorate, from Rhodes University, last night – said while he was encouraged by seeing young people stand for something, there were far more pressing issues needing energy and attention.

“If we were really concerned about colonisation, we would be walking around naked {because} clothes are a colonial thing and our entire lifestyles are colonial,” he said.

“In this country, a woman is raped every few minutes, we have crime, corruption, and a country that is fast turning into a rubbish dump. There are so many things to worry about.

“I’m encouraged that the born-free generation that has always been seen to be complacent is now standing up for something, but I wish that the same energy would be put into the other pressing issues as well.”

In his acceptance speech at the 1820 Settlers Monument in Grahamstown yesterday, Masekela said people did not realise just how entrenched the colonial culture was.

“We are so absorbed in other cultures that we do not realise that we spend billions of dollars on colonially introduced things.

“We do not realise we spend billions on other people’s hair,” he said, to awkward laughter.

The musician appears opposed to hair extensions and will not consent to photographs with people with fake hair. He dedicated the doctor of music degree to his late father, Thomas Selema Masekela, who did not have a degree and marvelled at those who did, including his wife who had three.

“One of my father’s biggest wishes was to have a degree, so this is for you, Selema,” he said.

Masekela jets off to Zimbabwe today for the start of a tour.

He treated graduation attendees to a rendition of a song by his ex-wife, the late Miriam Makeba, with Rhodes student Lonwabo Mafani on keyboard.