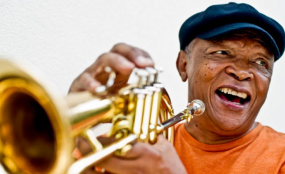 The Herald
By Jonathan Mbiriyamveka

Photograph by the Goodlife Family

In his inaugural lecture held on Tuesday at the University of Johannesburg during the Annual Hugh Masekela Lecture, the Zimbabwean music icon hailed Bra Hugh for staying true to his African roots.

The prepared lecture was availed to The Herald Entertainment yesterday.

“As I was preparing this lecture, looking at Hugh’s life – the challenges, the failures and the successes – I realised something.

“At this time in history, when we as Africans are being challenged in so many ways as we try to strike a balance between taking up more and more of Western culture versus holding on to the things that give us our identity; our languages, our values, our music, our dances, our way of dealing with conflict, our sisterhood and our brotherhood; we need people who can remind us what it is to struggle, to fight, and to win in the end – and do so without giving up our identity as Africans,” Mtukudzi said.

Delivering a paper titled “How do you measure the impact of a man?” Mtukudzi or simply Tuku to his fans, said Bra Hugh’s worth could not be measured according to accolades, fame or fortune but his humanity.

“Each time I meet Hugh, his music, his status as a legend and his accolades, have grown. But he as a person, his humanity, what we call in Shona “unhu” or as you would say here “ubuntu bakhe” – remains the same.

“He responds to them like a father, like a brother; with humility, with warmth – except if you’re wearing a weave. As we all know Bra Hugh does not like weaves,” he jokingly said.

Tuku, however, said that it was important to ask “what has my real contribution been?” and “how will my life be measured?” for people to measure the impact of a man or woman.

“Instead, you measure people by what they overcame to achieve those things, because that tells you the story of their strength of character. Or to put it differently, whether they are of sterner stuff or not.

“At a time when we see so much moral bankruptcy, where our continent cries out for answers and solutions, we need more than ever before men and women of character.

“As we fight to hold on to our heritage and to our continental dreams and the key ingredients that unite and identify us as Africans, we need men and women of character,” Tuku said.

By that time, Tuku was already a professional musician. Tuku had been following Bra Hugh’s work as well as respected his talent.

The two would exchange notes and then moved on with their lives.

It was only three years later that Tuku began to grasp some key aspects of Bra Hugh’s character.

“I was performing at a club called Job’s Night Spot in Harare. Bra Hugh was in the audience, and from nowhere he jumped up on stage and joined me and my band.

His energy, his laughter, his aura, his naughty smile were all so infectious.

“Our friendship has developed very steadily over the years and we have become serious fans of each other’s work.

We have performed on stage together many times and just last month in August stepped into the studio together for the first time – a dream come true for me.”